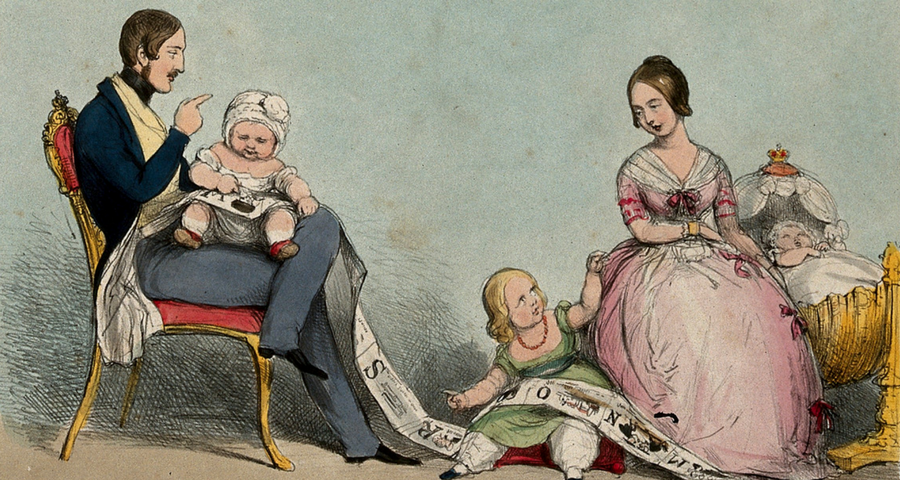 Victoria had her doubts.

She wrote to her Uncle Leopold.

Though all the reports of Albert are most favourable, and though I have little doubt I shall like him, still one can never answer beforehand for feelings, and I may not have the feeling for him which is requisite to ensure happiness. I may like him as a friend, and as a cousin and as a brother, but no more.

Of course, more came. And with it, one of the most remarkable marriage history has come to know.

Work together side by side.

Victoria was his sovereign.

Albert was the husband she’d vowed to obey.

Determined to have her crown and wear it too, Victoria was loathe to let Albert assume her duties. But Albert was more than a house husband and refused to be reduced to as much. When Victoria had his desk placed in tandem to hers, she saw what an asset her partner could be.

In his own words, Albert became “the natural head of the family, superintendent of her household, manager of her private affairs, her sole confidential adviser in politics, and only assistant in her communications with the officers of the Government, her private secretary and permanent Minister.”

Nearly four years married, Prince Albert traveled for business. He penned this love letter his first day away from Victoria.

My Own Darling, you will, while I write be getting ready for luncheon and will find the place vacant where I sat yesterday. In your heart, however, I hope my place will not be vacant.

I, at least, have you on board with me in spirit. I reiterate my entreaty. Bear up and don’t give way to low spirits but try to occupy your self as much as possible.

You are even now half a day nearer to seeing me again, by the time you get this letter if will be a whole day, 13 more and I am again within your arms.

The Heart and Mind of a Young Queen

The official companion to The Masterpiece Presentation on PBS opens a new realm of insight and color to the beloved queen.

Focusing on the early life of Queen Victoria, the hardcover contains letters, journal entries, and a behind-the-scenes look at both the Victorian England of the past and present on-screen.

Their marriage can be yours. Read secrets to Victoria & Albert’s relationship! – Tweet

Be open and honest.

There, at the altar, exchanging vows, Victoria slid a wedding band on Albert’s finger. In that moment, he whispered that there should be no secrets between them.

Concessions would not only be required for the betterment of one another but of a nation.

Having experienced the burdens, Victoria knew of the pains a husband would endure. She was sure to underline so in her proposal.

In a letter to his grandmother, Albert penned The Queen sent for me alone to her room the other day, and declared to me in a genuine outburst of affection that I have gained her whole heart, and would make her intensely happy if I would maker her the sacrifice of sharing her life with her, for she said she looked upon it as a sacrifice. The only thing that troubled her was that she did not think she was worthy of me.

Though the prince accepted, most of England was not accepting of her choice in spouse. In there eyes he was a foreigner, a pauper prince after the nation’s purse. To ease his homesickness, the couple spoke German when in their private apartments.

Within their marriage, Victoria’s burden was that of carrying children. The queen suffered difficult pregnancies for roughly a third of their marriage.

From their first night together of “bliss beyond belief,” the couple valued their time together.

Victoria commissioned a seductive portrait of her for Albert’s eyes only. The prince had special mechanics installed inside the quarters of Osborn House. He could push a button near the bed which would bolt the door.

Nine children were born within the first 17 years of their marriage.

What legacy do you intend for your marriage?

6 thoughts on “From A to V: The Complete Guide to a Marriage like Albert & Victoria’s”